What's in a name?

A couple of weeks ago, I mentioned hearing from someone with my name, first and last.

Due to things I have listened to recently, I realized that people don't think about what their name means.

In the Old Testament times, your name described your personality. In fact there are several places in the Bible where people were renamed because their name didn't represent their name. Abram was renamed Abraham, Jacob was renamed Israel.

I am in training this week with another Joel. As a result, I started remember what my name means. I found this site.

The blind man and the elephant

Yesterday, I had a doctors appointment so drove there, then to a Park-N-Ride to take the bus to work. As I was driving, I listened to several podcasts, including several messages.

As we were praying at worship band practice, this illustration struck me. The picture on the right is based on the story of the 6 blind man and the elephant. In the story, the men are placed around the elephant and asked to describe it...

A Jain version of the story says that six blind men were asked to determine what an elephant looked like by feeling different parts of the elephant's body.

A wise man explains to them

All of you are right. The reason every one of you is telling it differently is because each one of you touched the different part of the elephant. So, actually the elephant has all those features what you all said.[1]

As I listened to those podcasts yesterday, the people talking were certainly Godly men. They do not approach ministry or God the same and each sees the part of God they are focused on at that time. In Hebrew, the Bible -- Old Testament -- has the same perspective. You can see a list of all the names for (or attributes of) God here. Each one describes God from a different perspective.
Posted by Joel at 6:14 AM 1 comment:

I opened up my email yesterday to an email from Joel Frederick. Usually this means someone is spamming me but no.

Joel told me he registered joelfrederick.com and this blog popped up in a Google search.

Growing up, Joel was such a unique name. There was nobody else that I knew that had that name. Up until this point, I have been occasionally bothered (annoyed is too strong) by emails to someone with a similar last name named Joel. But to find someone with the same first and last name is quite unique.

We have exchanged emails now... I don't know that things will progress any farther but we know that we exist.
Posted by Joel at 9:25 PM 2 comments:

A friend at work introduced me to the Weather Underground. One of the features that is fun is the personal weather stations, these stations take readings and report them back to the web for us to see.

Here is information from one near me... One on the other side (west) of town looks like this.

Time for a change

I have always liked rather abstract art. That is one of the reasons I picked the image (thumbnail to the left) from 3dCrew. I figured, after over a year of the same desktop, it was time for a change. Back out to 3dCrew to get another.

They have some amazing images. Oh, one other thing I like about this site... The images are free!
Posted by Joel at 10:42 PM 1 comment:

As I have been talking to people, I am surprised how many people around me who identify themselves as Christians have never read through the Bible at all. By that, I mean the whole Bible. Front to back. That is a lot of reading if you do it in just one sitting. If you split it up through-out a year, however, it is pretty bite size.

This was something I was encouraged to do when I was in High School, then again a couple of years ago.

Since the start of the new year is the time for all those commitments to do things, many of which get dropped, I started out the year with a decision to read through the New Testament this year. That is where my plans changed.

While at a worship band meeting last week, Rob, one of the drummers suggested I check out the Daily Audio Bible because I can download it to my new iPod. I have now decided to listen to the Bible this year. To start out, let me just say, it took me a bit to get used to the readers reading style. I don't even notice it now!

If the possibility of seeing what is really on those pages gets your interest and you don't want to listen, check out this daily reading plan. The year is still young and it is never too late to start.
Posted by Joel at 6:26 AM No comments: 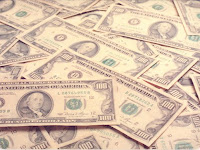 This evening, as we rode home on the bus, I glanced over at the billboard and noticed that the Powerball Lottery was now at $151,000,000. Every time I see the sign, especially with that high a dollar figure, thoughts start to swirl in my head.

My first thought is that I realize that without a miracle, I would never win, even discounting the incredible odds, I rarely buy a ticket. I don't consider it gambling, more like voluntary taxes.

So, at $151 million, as a single winner, you would probably take home just less than half of that if you took the one time distribution, after taxes.

So what would you do with that? I was talking to a fellow on the bus about that. He told me he would buy a bunch of land and build a house. While the house was being built, he'd go on a cruise. When he got home, he'd set his friends up as employees and pay them lavishly. He would also set up trust funds for his kids who would receive that money after completing various important life events like years of college or anniversaries.

Myself? I could see taking a enough to feel secure, paying off the house and living debt free, helping out family members, etc. That would leave a whole lot of money laying around that could be put to good use helping people who need it (as opposed to people who think they need it).

So why haven't I won? Honestly, I suspect that God doesn't want me to. Not because it is a punishment but because it doesn't teach me character. At least, I hope that is the reason because the alternative (and if I were totally honest maybe the reality) is that my heart really isn't that charitable.

I do not believe that God cares if we are rich or poor but cares more about our hearts. This closely parallels the message this last weekend (Jan 7) at church. The question that was posed to us was: "Do you own your stuff or does your stuff own you"!
Posted by Joel at 11:01 PM 1 comment:

A number of strange (for Colorado anyway) occurrences over the last 3 weeks.

If you have been watching and reading anything about Colorado, you should have seen that we have gotten our 3rd major amount of snow in as many weeks. Typically, one snowfall will melt off before we get the next. Not this year however.

The second item is the Derrent Williams shooting. Not being a football fan (when I watch the Broncos the tend to loose so I quit watching), I have not been interested or know much about the victim. As I was listening to the news, however, I started to wonder... If this had been someone else other than a sports celebrity, would the police be working this hard? Would the news keep such close watch?

I do remember when my friend Joel England was killed in 1998, there seemed to be a lot a press coverage but under normal circumstances, it is a blip in the normal days news.

So, my question is, how do I redeem this post? What is the worth of a person? Well, if you are here on earth, it seems to depend on your entertainment value or your bank account. To God, however, we are worth quite a bit more. Matthew 6:27-33 says:

"... All this time and money wasted on fashion—do you think it makes that much difference? Instead of looking at the fashions, walk out into the fields and look at the wildflowers. They never primp or shop, but have you ever seen color and design quite like it? The ten best-dressed men and women in the country look shabby alongside them.

If God gives such attention to the appearance of wildflowers—most of which are never even seen—don't you think he'll attend to you, take pride in you, do his best for you? What I'm trying to do here is to get you to relax, to not be so preoccupied with getting, so you can respond to God's giving. People who don't know God and the way he works fuss over these things, but you know both God and how he works. Steep your life in God-reality, God-initiative, God-provisions. Don't worry about missing out. You'll find all your everyday human concerns will be met.

If you haven't already heard, my friend Dave is putting on a fund raiser for Home of Refuge.

The worship should be great! If you don't live in the area and want to donate, please do!

Quite a few people I know (and know of) have participated in short term missions trips to the Home of Refuge and are looking forward to going back -- a great endorsement!

Please consider showing up and helping out!
Posted by Joel at 7:41 PM No comments:

A couple of breaking (well, one is rather old) "news" items...

First, so that I could fully join the "techno-geek" crowd, my lovely wife bought me an iPod Nano for Christmas. It is, as my friend Carol Ann pointed out, is really nice to have. Thank You Marj! I have already put one of my other presents, "Concert for Bangladesh" on so I can listen on demand (Thanks Mark).

Second, my "Back to Beck" suggestion made this Music I-Quiz! (If you are unfamiliar with "Back to Beck" as I suspect most are, think of a musical "Six Degrees of Kevin Bacon" with Jeff Beck as the end point.
Posted by Joel at 4:34 PM No comments: