We made it back from sunny Florida and back into the daily grind (no not coffee).

It was my intention to post more often but.... While on vacation, sometimes the best intentions are not met.

I will try to post some pictures later this week.

Our high points?
Our low points? 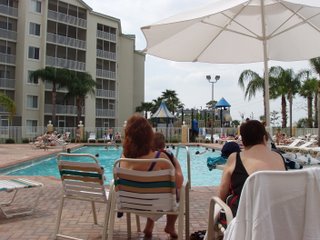 The Covered Side of the Moon

Brian did it again.

As a child of the 60's and 70's. Pink Floyd's Dark Side of the Moon was a memorable album for me as well as many others. It was the definition of album rock.

Brian now gives us the Dark Side of the Moon in covers... All Styles, etc. Lots of fun!

Songs and styles include a bluegrass Money and an a capella version of Us & Them. 49 minutes great!

(Broken) Windows of the Soul

Several years ago, I read a book by Dave Thomas, one of my (unknowing) professional mentors called "The Pragmatic Programmer". In there, he talks about Broken Windows.

One broken window, left unrepaired for any substantial length of time, instills in the inhabitants of the building a sense of abandonment---a sense that the powers that be don't care about the building. So another window gets broken. People start littering. Graffiti appears. Serious structural damage begins. In a relatively short space of time, the building becomes damaged beyond the owner's desire to fix it, and the sense of abandonment becomes reality.

You can find out more about the theory of broken windows on wikipedia....

Recently, I started thinking about what makes those around us look at us a hypocrite. It seems to me that the broken windows of our souls may have something to do with it.

If we leave those windows in disrepair, pretty soon, our actions and words do no line up.

One of the things about broken windows that I found interesting was that during the 1990's, New York Mayor Giuliani started working a "Zero Tolerance" policy toward the "broken windows" of the subway -- graffiti. During this time period, the crime rate dropped. From the wikipedia article above....

Thus, Giuliani's "zero tolerance" rollout was part of an interlocking set of wider reforms, crucial parts of which had been underway since 1984. Giuliani had the police even more strictly enforce the law against subway fare evasion, and stopped public drinkers, urinators, and the "squeegee men" who had been wiping windshields of stopped cars and demanding payment. Rates of both petty and serious crime fell suddenly and significantly, and continued to drop for the following ten years (see: the 2001 study of crime trends in New York by George Kelling and William Sousa, and the 2002 study by Hope Corman).

I realize is that windows are going to break, both physically and spiritually. It is how we deal with them that matters.
Posted by Joel at 9:28 AM 1 comment:

A few weeks ago, the ChurchMarketingSucks website posted about a marketing campaign called "My Lame Sex Life".

You can read the ChurchMarketingSucks follow-up here.

You can also find out more from a couple of articles that Kem Meyer blogs about here.
(No suggestions)
Edit...
Ignore all
Add to dictionary
Posted by Joel at 5:41 PM No comments:

Thinking about being exclusive...

As I left the computer, I promised more thoughts about the "Authorized Version Only" movement.

I can't honestly tell you what God thinks about this situation. I, however, find it a devisive movement, especially when its proponents have started character assination of translators of other Bible versions.

My thoughts are as follows:
Ultimately, I believe this sort of movement will tend to chase people away from, not toward God.
Posted by Joel at 6:16 AM 2 comments:

It started as feedback to the question of "What Bible should I use?". Someone told about all versions but the King James being bad based upon a book by Gail Riplinger called New Age Bible Versions.

Beliving her premise to be wrong, I went on a hunt for some information, finding this on-line article by James White called "Why Respond to Gail Riplinger". We now have dueling credentials, Phd. vs. Phd.

So, what left me shaken? I read the James White article and, if his claims are true, admire his determination to stand against the "New Age Bible Versions" book. That is not, however, what effected my sleep for the last few nights.

I saw how God had protected me from this sort of thinking from early in my college days. You see, the campus organization that I was a part of was not associated but was aligned with much of Mrs. Riplingers thinking.

More to come about this tomorrow.
Posted by Joel at 10:36 PM 1 comment: