It was time for another Black Belt University at Origin Martial Arts where Kyle has been studying Karate (Tae Kwan Do).
This one, however, was significant.  Kyle was up for his provisional black belt.  This involved 4 hours on Friday, 7 on Saturday and Sunday.
Today, Kyle and the other candidate were proving themselves by running the "Black Belt Mile", exhibiting their skills in their katas, sparring and board breaking.
Kyle made Marj and I proud parents.  His teacher told us that going into this weekend, there was some concern about the time he was able to spend being mentored by Nicki (she and the other provisional black belt were testing for their actual black belt).  Because I played this weekend, I was unable to attend most of the day.  I got to see some of the test they put him through in spite of that.   He spend 10 to 15 minutes sparring with various students one after another, each one fresh and Kyle getting more and more tired.  He had already run 1/2 mile, done the various warm-ups that were done, spent Saturday learning to knife fight as well as street fight for self defense.
Talking to his teacher later, I found out that the purpose of this was to prove Kyle's character. Kyle did well.  He didn't give up even though he was being hit more and more as well as being fatigued and having a headache from the blows (he was wearing protective head gear, hand padding, etc, but unlike many others, no protective chest pad).
It was a side of Kyle I don't often.  We won't know for a couple of weeks if Kyle earned the provisional black belt.  Keep posted!
Posted by Joel at 9:16 PM No comments:

I started reading (yet) another blog.

"What Chrstians Like" is a tongue-in-cheek look at the Christian culture in America. Sometimes it hits a little close to home... My home that is.
Posted by Joel at 6:46 AM 1 comment: 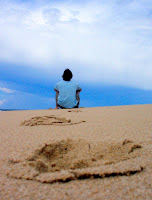 Today, at Northern Hills, we are in the second week of "Ditch the Diaper", a series on James. Through this, we are being encouraged to "Grow up -- Put
your faith into action". The first week was really good and the discussion in our "Life Group" (or small group) was really active.

As we approach our second week, I was reminded of the parody or follow-on to the poem and song "Foot prints in the sand". This is called "Butt Prints in the Sand".

One night I had a wondrous dream,
One set of footprints there was seen,
The footprints of my precious Lord,
But mine were not along the shore.

But then some stranger prints appeared,
And I asked the Lord, "What have we here?"
Those prints are large and round and neat,
"But Lord they are too big for feet."

"My child," He said in somber tones,
"For miles I carried you alone.
I challenged you to walk in faith,
But you refused and made me wait."

"Because in life, there comes a time,
when one must fight, and one must climb.
When one must rise and take a stand,
or leave their butt prints in the sand."
Posted by Joel at 6:27 AM No comments:

Marj saw the site and trailers for the movie Expelled staring Ben Stein.