In May, I blogged about the Pandora Podcast. They have not only given us audio but have started videos of "Great Places to see Live Music".

The latest of these is on "Red Rocks" and can be seen here.

Red Rocks is one of the places my parents visited on their honeymoon (if I remember right). The fun to watch as I have seen several concerts here as well.
Posted by Joel at 10:37 AM 1 comment:

If you are wondering, I have not stopped reading. I just stopped mention that here!

I will fix that next month when I tell about the things I have been reading.
Posted by Joel at 10:03 AM No comments:

One of the podcasts I have been listening to is Grammar Girl. Why?

When I was in college and trying to learn French, I contended that I couldn't learn a foreign language because I didn't know English well enough.

This podcast is a help! You can listen to the podcast I am blogging about here. This particular one is on Similes and Metafors. Within the podcast the speaker (not Grammar Girl this week) states:

People use these figures of speech when speaking romantically. “Dearest, your eyes sparkle as starlight in the water of a deep, cool well.” The speaker is drawing a parallel between his beloved’s eyes and starlight in a well. She doesn’t actually have wells for eyes; if she did, she would slosh when she walked. But her eyes do sparkle, and that is the connection he’s drawing.

I was amused to hear him say "She doesn't actually have wells for eyes; if she did, she would slosh when she walked."

Why are these important? We hear and use these language constructs all the time. Do we recognize them? Quite often not.
Posted by Joel at 9:45 AM No comments:

Some of that is due to being busy (I have been less busy this year than last but things still go faster than planned).

I have been listening to s sermon series on "Sabbath Living". Not on taking Saturday off but on living inside the margins of your life. Allowing you to get some "space to breathe". I suspect I am on the outside of the margins in my life.

You can find the audio here, here, here and here.
Posted by Joel at 5:59 AM No comments:

A test of giving and pride

A friend and fellow musician on our worship bands gave me a gift last night that has tested my pride. He had gotten a pair of headphones, then found these, then got another pair of the original as a backup pair. Last night, he offered these to me. THANKS TODD. 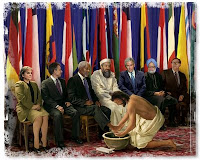 In the few days since I was introduced to this print, it is quickly becoming one of my favorites. To get the full story behind the picture, click on it. For the short version, this was used in a promotional campaign in Seattle for seminars on the character of God run by a ministry called Heavenly Sanctuary.

It shows several world leaders with their feet being washed by Christ. The most controversial thing about it is that Osama Bin-Laden is one of those sitting before Christ.
Before you react too harshly and become offended, think it for a bit. We are entering the Christmas season, named after Christ. His message was contrary to the Jewish leaders of his day, promoting love for those around him, rather than hatred. He did not endorse any of the political powers and yet, has influenced the world for 2000 years.

In the "reverse economy" of God, he told us to serve those around us, changing the relationship between ourselves and them from one of equals or, even one of power to one of servitude. This was not only a lecture to his diciples, he deomonstrated it to them (and through scripture, us).

Did Christ die for these people? Yes, each and every one of them. He also died for those they represent or rule. Can the most innocent or the most evil of these people be redeemed? Absolutely! Not through their own doing, however,
Posted by Joel at 12:00 AM 1 comment:

I am not an avid football fan but I have to give kudos to Trinity University in their last play against Milsap College.

Here is the video: