They have been the rocks in my life. Always there, always supportive.
Happy Anniversary!
Posted by Joel at 7:11 PM No comments:

We arrived at the coast yesterday, after dropping the dogs off at a kennel.
I thought the temperatures were chilly (about 60F) but was told they were perfect.
I took the following pictures as the sun set over the horizon. 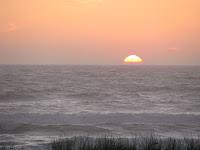 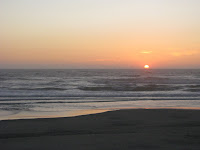 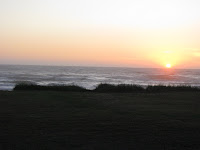 We've been on vacation since Friday. Packed up the dogs and headed west.
Here are some of the photos we have taken...
These were taken over the Snake River near Twin falls, Idaho. 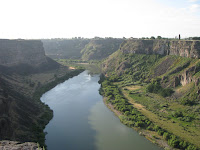 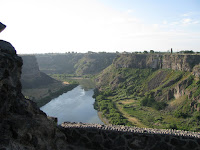 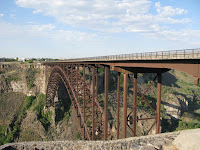 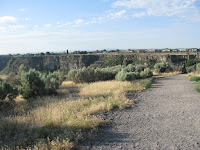 Listen to the Jesus Manifesto

Last month, I wrote about the Jesus Manifesto. I have read the manifesto several times but listening to it was a big treat for my ears. Especially to hear the authors read it. You can listen here. Turn it on, sit back and close your eyes...
Posted by Joel at 1:29 PM 1 comment:

Derek Webb is in the process of releasing a CD called "Stockholm Syndrome". It's got challenging lyrics to listen to. Jesus Creed posted about it and you can listen to one of his songs there.
Stockholme Syndrome is described here as:

The term, Stockholm Syndrome, was coined in the early 70's to describe the puzzling reactions of four bank employees to their captor. On August 23, 1973, three women and one man were taken hostage in one of the largest banks in Stockholm. They were held for six days by two ex-convicts who threatened their lives but also showed them kindness. To the world's surprise, all of the hostages strongly resisted the government's efforts to rescue them and were quite eager to defend their captors. Indeed, several months after the hostages were saved by the police, they still had warm feelings for the men who threatened their lives. Two of the women eventually got engaged to the captors.

As I thought about is, I started wondering why the title? Is it possible that I am experiencing Stockholm Syndrome?
Posted by Joel at 6:18 AM No comments:

Grace has completed the TULIP vs BEERS debate with her final post, TULIP or BEERS: Perseverence of the Saints. I also updated the list I posted earlier.
Posted by Joel at 6:35 PM No comments:

From Eternity to Here - Take a listen

Frank Viola has posted chapter 1 of his book in audio format here. If you want to hear what struck me, take a listen.
Posted by Joel at 6:13 AM 2 comments: