It seems that my posts here run in phases... There are lot of things running through my head these days but few tend to stop running long enough to get to the fingertips.

This was rather interesting however. Thanks to the Coverville podcast, I was introduced to a band that I have heard but didn't know... Polyphonic Spree.

They have a bunch of influences but the closest I could come to describing the band is "Sgt. Pepper". A lot of 60's pop in a 24 piece band.

They were just through the Denver area earlier this month and, of course, since I didn't know about them, I missed them... Maybe next time.
Posted by Joel at 12:35 AM No comments:

I just got the latest episode of the "Bored-again Christian" podcast. Number 45 to be exact.

A couple of interesting things are contained in the all (well mostly) music episode.

Now for the downside. Derek uses a form of viral marketing that I have never been comfortable with. Along with giving my name and email address, he requests the name and address of 5 others to get the download. I do, however, believe him when he says that they email addresses will not be retained.

In a way, this is my way of complying guilt free with his marketing techniques... Listen to the Bored-again Christian podcast, then pop from the website over to check out Derek Webb's free download.
Posted by Joel at 10:22 AM 1 comment:

iPod Observer talks about MyVu glasses for the iPod. The price tag, however, is higher than even the top of the line iPod.

Then I read this post from Mark Battersons evotional Blog. On top of that, probably my favorite recent post is "Top-ten ways to redeem technology".

A tale of air

This story starts out some time ago...

Once upon a time, in 2004, it came time to blow out the sprinkler lines. A trip to the local hardware superstores and pawn shops found nothing to help without investing a LOT of money. As a result, we drafted a "hero" of sorts, my Brother-In-Law, to come and help. Mark brought his air compressor over and we blew out the lines.

Some time later, in 2005, it came time again to blow out the lines. The air compressor that tempted me was more money than I wanted to spend but.... A new

Home Depot had just been built near my house. A trip there and I found it! The air compressor I wanted to invest in... The problem was, money. My neighbor had a solution! I could borrow his! Using Mark's example, I blew out the lines. In the mean time, however, I started planning. If I asked for gift cards for Home Depot, that air compressor could be mine.

I made it through Christmas, Anniversary, Valentines Day, Fathers Day and finally, my birthday. The $$ on the gift cards covered the $$ for the air compressor. Yea!

My family and I went to Home Depot and alas, they were almost out of the model I wanted. I took the second to the last one there. Kyle and I assembled it but... OH NO! It wouldn't turn on!

Let me take you down a literative bunny trail here. For years I went to Home Depot near our old house because of prices and the things they carried. I didn't go there for customer service. When we found the one near us in Brighton had opened, one of the first things we noticed was the helpful friendly people that worked there.

I took the non-functional compressor back last weekend. There was no hassle, in fact, the only thing they did was to plug it in to verify the facts.

Thank You to the Brigton Home Depot for your helpfulness in a time of stress and disappointment.

Where am I going?

The answer? I don't really know...

The story started several weeks ago when my friend Scott posted this video from Vintage21. Out of curiosity, I dug into their archives and found a series of messages on Revelation. Not your typical peek into what they think the "end times" are about but a look at the 7 churches mentioned and how the admonitions applied to me.

Next, I read the willzhead post on Gregory A. Boyd, purchased both his book and the book by Randall Balmer (see this and this for more...). As a result, I started listening to podcasts from Gregory Boyd's church, Woodland Hills.

Yesterday, my church started a series on Revelation as well with a similar theme as Vintage 21. I am looking forward to where that is going.

This morning, while getting ready for work, I am thinking about taking risks and my friends who help at the Denver Rescue Mission monthly. I got home and heard LifeChurch's weekly podcast on being a disciple which states that a disciple of Jesus will...
So, where am I going with this.... Honestly, I haven't a clue.
Posted by Joel at 7:49 PM No comments:

A strange start to the morning...

I don't know why this happened but I found it refreshing and strange at the same time.

I remember sleeply turning off my alarm as it rang this morning, then un-characteristically, rolling over and dozing off.

A few minutes later, my wife woke me up out of my sleep. At that time, I remember dreaming (this is unusual because I don't often remember my dreams). The dream?

I was in the midst of worship singing the song Majesty...

Majesty, Majesty
Your grace has found me just as I am
Empty handed, but alive in your hands
Majesty, Majesty
Forever I am changed by your love
In the presence of your Majesty

Actually not. I haven't had much to put down because I have been so busy.

Jason, the worship leader from Solomon's Porch sent this link to me... Being on the worship team we all have our worst nightmares. This is one of them. Play the clip... You'll laugh, you'll cry...
Posted by Joel at 7:23 PM 1 comment:

You just have to love Colorado

I have been told that Colorado means "color red". After seeing the sunset Monday night from my sisters house, I'd have to agree. 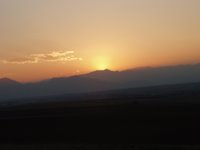 The family gathering... The final chapter

Every one has flown home. We haven't heard yet who has arrived but I trust they left.... Things are returning to normal here and tomorrow, I return to work.

It was wonderful seeing everyone together!
Posted by Joel at 5:50 PM No comments:

What a busy weekend...

This weekend, we are celebrating my parents 50th anniversary. It actually happened back at the end of July but their wish for their anniversary was not the normal party but a chance to get together with their children and grandchildren.

To that end, my sister Jane and her husband as well as my family have hosted the rest of the family. My sister lives a few miles away so this has been fairly convenient.

Friday started the affair. My parents, one niece and her boyfriend flew in first, my first trip to the airport. Then my brother and another niece flew in, trip number 2. My final trip was to meet my sister-in-law.