Some time ago, I subscribed to the CoverFreak blog.

In today's Thanksgiving post, one of the tunes was different enough to prompt me to blog.

If you remember Don McLean's "American Pie", the version from Just Luis is Don McLean meets Techno.
Posted by Joel at 9:33 AM No comments:

Last night was Cornerstone's (Kyle's School) homecoming sock (or is it soc?) hop. The theme was "50's" of course.
The hosts had fixed up their barn in a 50's diner theme (well done) with grilling of burgers and dogs.
Marj took Kyle to the Salvation Army store to find a leather coat ($15). Here is a picture of him. 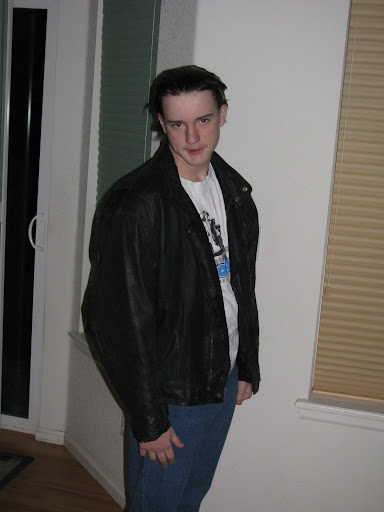 Last night, I took the family to see Rob Bell speak in his Drops Like Stars book tour. Rob has an interesting way of looking at the world around us and draws on both the Bible and the experiences he and his friends have to describe how Creativity and Suffering feed each other.
While I think much (if not all?) of the audience were believers to some extent or another, the Gospel was preached.
A friend who, over the last 18 months, has gone through a few trials, joined us. I saw what was talked about speak directly to her.
At one point, Rob asked those who had been touched directly (themselves or a family member) by cancer to stand. This brought what seemed to be over half the auditorium to its feet. The point behind this is that the suffering eliminates the extra, leaving those affected looking at what is important. He suggested that someone given 6 months to live doesn't usually go "I guess I better go trim the hedges". Rather, they repair relationships and live life as fully as they can.
This will be an interesting book to read.
Posted by Joel at 5:42 AM 1 comment:

The bad, the good and the odd

We've had a set of Infinity RS225 bookshelf speakers for 10-15 years. This weekend, however, something happened and I heard a big pop. I didn't think much about it until we were showing August Rush to Kyle and kept hearing a crackling in one of the rear speakers.
I disconnected it long enough to pull it down and get the model number.
Thinking it was a lost cause, I decided to find out if I could get replacement parts. I went to the Infinity site and finally got into their support website (you get no support without the model number) and filled out an email form asking about the part.
Yesterday, I got a nice email from "Sharon" giving me the part number and a phone number to call to order the part. The $50 part is on the way which saves me at least $25 (to replace the speaker) or $100 because I'd need a matched set.
Let's see... That was the bad and the good... Now for the odd.
Infinity was purchased by Harman International (I knew this because it was on their site). While I was on hold, I was listening to a boomy bass voice saying "Thank you for calling JBL" (JBL was always known for their big bass). I finally discovered that JBL was also purchased by Harman International. One big happy family.
Posted by Joel at 5:41 AM 1 comment: