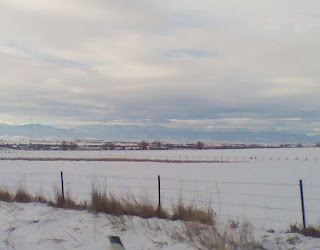 On Saturday, the day after Christmas, I was taking Kyle to a friends house. I thought this scene of the mountains looked interesting. I asked Kyle to snap this photo as we were heading down the road.
Posted by Joel at 6:41 AM 1 comment:

I haven't made this before but here we go...
We have tried to reduce our paper foot print in past years by publishing our Christmas greetings electronically. You can read our family's Christmas letter here.
Posted by Joel at 9:25 AM 1 comment:

I remember listening to the Coverville Countdown a few years ago while shoveling snow from the weekly snow falls we had a few years back.
Every year, Brian who does the Coverville podcast takes nominations for the best cover songs of the year. This year, was no different. He has released his first show (number 40-31) of this years songs. They include:
Go out and take a listen!
I still need to go shovel from our latest snowfall. We will be having a white Christmas this year.
Posted by Joel at 7:46 AM 2 comments:

Quotes of the day

On my Google front page (personalized), I have the "quote of the day". Much of the time, it is just noise and doesn't get looked at. The last couple of days however, I have enjoyed these. Yesterday it was:

I know that was a little geeky. Today's is

I loathe the expression "What makes him tick." It is the American mind, looking for simple and singular solution, that uses the foolish expression. A person not only ticks, he also chimes and strikes the hour, falls and breaks and has to be put together again, and sometimes stops like an electric clock in a thunderstorm.
- James Thurber

It is so easy to forget that others don't just tick but do all the other things like chiming, etc. It is all part of the human process of forgetting the magnificence of our creator.
Posted by Joel at 9:04 AM 1 comment:

Scot McKnight, professor at North Park college in Chicago and author of The Jesus Creed and The Blue Parakeet, gave last Sunday's (Dec 13, 2009) message on the Lords Prayer at Mars Hill Bible Church in Grand Rapids, MI. If you are interested, you can listen here (available for a limited time) or here (available for a longer time).
He believes that in the Lords Prayer, Jesus took the Shema (Deut 6:7) and added to it to transform that prayer into something more, the Jesus Creed.
** He has some reflections on his time here.
Posted by Joel at 10:47 PM 1 comment: 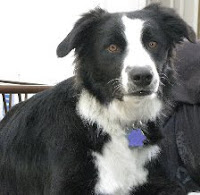 We stopped by with Logan to visit a family in Erie, CO today. They had filled out the paper work, went through the background checks and the home visit.
They met Logan and, not surprisingly, fell in love with him. It was a little sad to leave him but he will get all the human attention he wants there with no competition from other dogs. He will also get to children to play with and grow up with.
Posted by Joel at 1:27 PM 1 comment:

The fruit of repentance

I recently enjoyed listening to a sermon from Woodland Hills Church in St. Paul given by Jin Kim, pastor of the "Church of All Nations" in Minneapolis. It was challenging and fun to listen to.
Church of All Nations is a Presbyterian congregation but he calls them "penitently Presbyterian". At one point, he tells about the Presbyterians being "sprinklers" but he does a yearly immersion baptism and how those being baptized a bit afraid of how long they are "kept under".
The message was quite challenging and dealt with believers all being priests, how we should all be reaching out. He also challenged the listeners to look for the fruits of those in leadership.
Posted by Joel at 5:46 AM No comments:

When we think about romance stories, we often think about "Romeo & Juliet" and some would think of "Pretty Woman".
When reading "From Eternity To Here", Frank Viola states that all romance stories pale in comparison to Christ's love for his church.
So, looking at romance stories in the Bible, we often think of the Song of Solomon. We may also think of Ruth or Esther. Rarely, however, would we think of Hosea.
Let me set it up a bit. Hosea was a prophet that lived around 700 BC. Isreal was lead by kings who didn't regard God very highly and lead the people into idol worship. In fact, Israel (the split state) was always lead by "evil" kings. Judah was occasionally lead by kings who followed God but at this time, they also didn't regard God highly and also lead the people into idol worship.
Hosea was commanded to marry a prostitute named Gomer. They had several children, each one with a name that spelled out how God felt about Israel at that time.
I remember Brian at the Daily Audio Bible talking about how the prophets (like Hosea) were used by God. He said that the prophets were given little plays to act out to illustrate God's message for the people.
Here is what happens in Hosea's "play". Gomer goes back to prostitution and Hosea wanders the streets calling her name. He finally gives up. Then God tells Hosea to buy Gomer back from the slave market where she is being sold.
While I am listening to Hosea yesterday, I couldn't help but think of the story of the Prodigal Son. I've heard several other perspectives on that story lately. The one that sticks out the most is that while the son is the emphasis of most of common thinking. This is really more the story of the faithful father.
The reason I kept thinking of this story while listening to Hosea is that Jesus is the faithful lover, just as God was the faithful father in the Prodigal Son story. He courted Israel since the time of Abraham. When he died and rose, he bought us back (i. e. - ransom, see Hosea buying Gomer back) to be his bride.
There is a poem that Paul quotes in 2 Tim 2 which I am also reminded of as I go through Hosea. It reads

Here is a trustworthy saying:
If we died with him,
we will also live with him;

if we endure,
we will also reign with him.
If we disown him,
he will also disown us;

if we are faithless,
he will remain faithful,
for he cannot disown himself.

No, not that day.
Yesterday we took Logan to the flyball tournament to sit at the Western Border Collie Rescue table.
Logan met several families who may be interested in taking him. We also got to talk to the people who picked him up in Grand Junction the day before Thanksgiving.
There was no end of activity so on the way home, Logan was out like a light
You can now see Logan's biography on the Western Border Collie Rescue website.
Posted by Joel at 5:30 AM No comments: 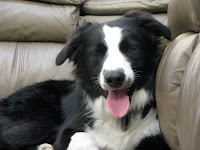 A few months ago, I wrote about Western Border Collie Rescue. Last Wednesday, we had a new dog come into our lives for a little while.
Kyle named him Logan. We found out he is 2 years old and was abandoned by his owners who were behind on rent and left town. Wednesday, he was in a car from Mesa County (Grand Junction, CO) to Denver where we picked him up to foster.
He is good with kids, cats and other dogs. Loves balls and cloth frisbees and any sort of attention.
He will be up for adoption as soon as his vaccines are current.
Posted by Joel at 5:49 AM No comments: