The world is "God Breathed"

I ran across the following quote from a comment discussing "Whatever happened to Bill Gothard".

This world is God-breathed. It is a wild, perilous, vivid, and unpredictable place. You cannot put it into a paternalistic, legalistic box and hope to see His face. Where can we experience God if we refuse to experience anything?

As a parent, I want to keep my son from experiencing pain and injury. On the other hand, those are things that make us stronger.
A case in point is our bones. In a recent podcast on bone health, the woman who was the "expert" stated that while taking calcium was needed, your bones only became stronger with impact. While cycling and swimming are good thing for your aerobic abilities, it is the impact of running or walking or punching a bag that helps increase the strength of your bones.
I've often said that it is my job as a parent to let my son "fail safely" so that he can learn. Each failure helps strengthen his character.
Posted by Joel at 12:31 PM 12 comments:

For the first time in many years (maybe one of the first times while here in Colorado) Marj, Kyle & I had no responsibilities on Easter.
That allowed us the luxury of going to the Easter Sunrise service at Red Rocks. The day was cold with drizzle. We didn't see the sun rise but it did (I'm positive of that).
We enjoyed the service and I was able to take some photos using my phone. 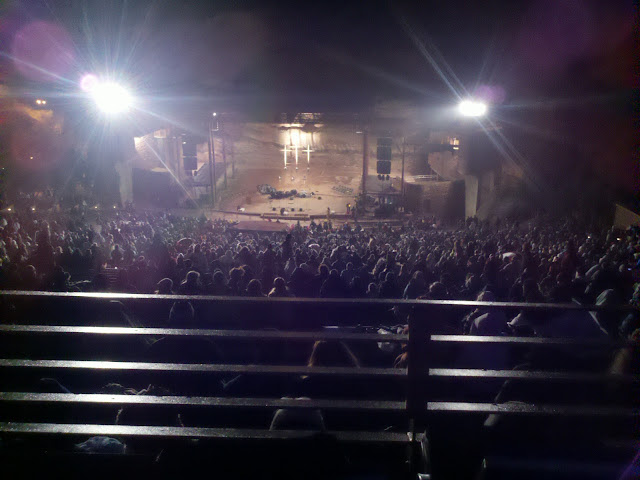 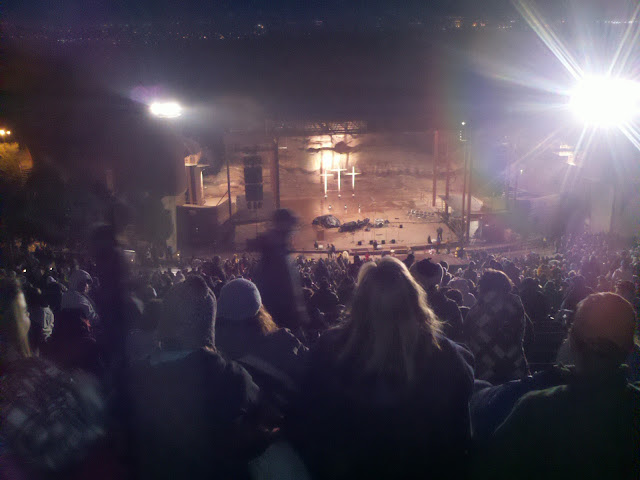 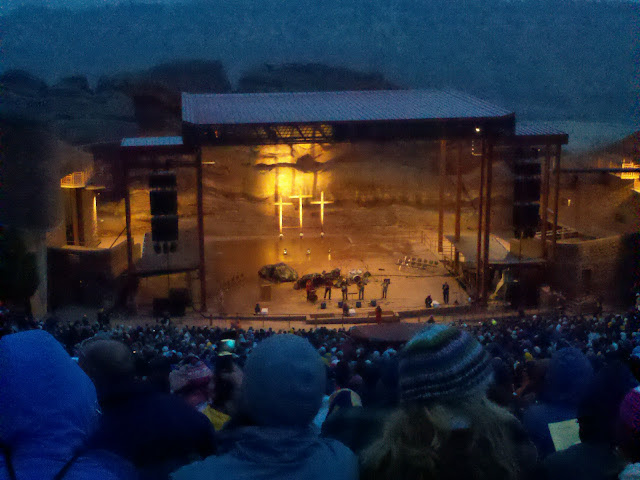 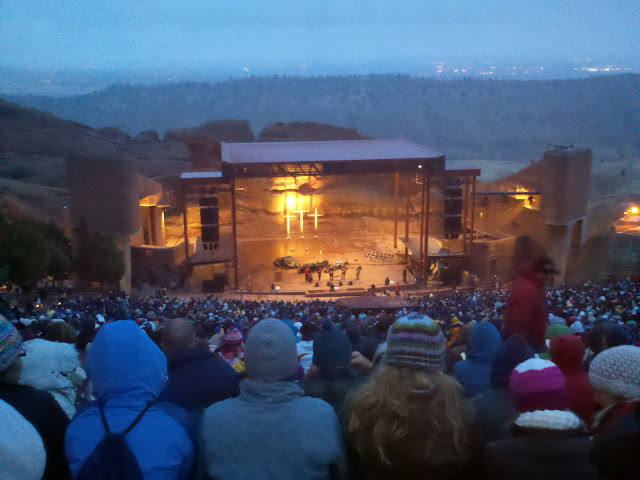 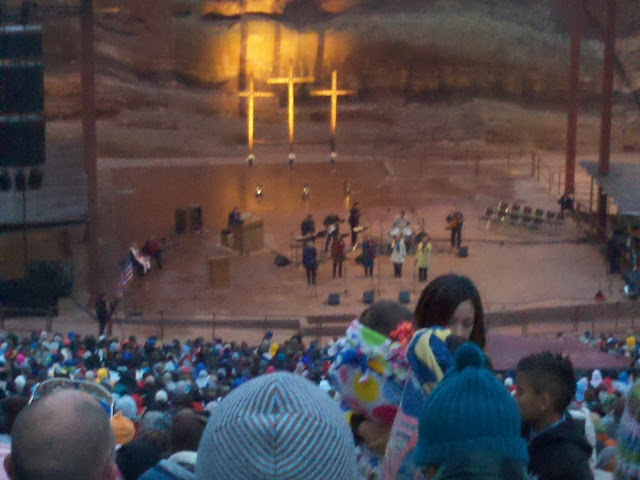 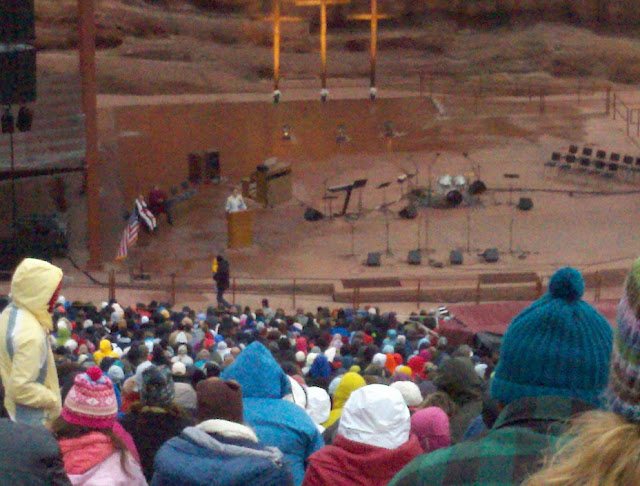 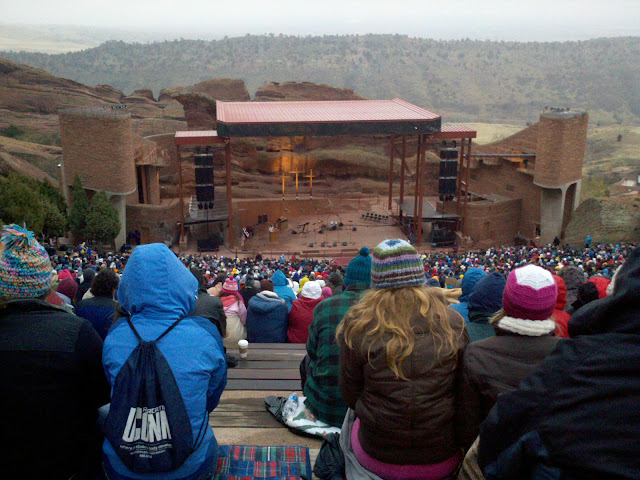 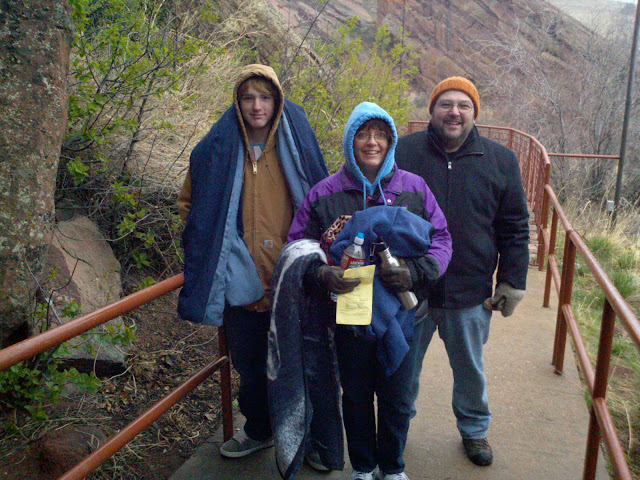 We decided we needed some rest and relaxation this year for spring break so off to Orlando we headed.
We tried using frequent flyer miles but that didn't work out so well... Spring Break is, after all, spring break.
Kyle & Joel ended up flying into Atlanta Friday afternoon and meeting Marj's brother Mario who took Kyle home. Because of parent-teacher conferences, Marj flew in early Saturday morning. Joel picked her up and we stayed near the airport, heading to Mario's house (near the Alabama border with Georgia) the next day. We ate breakfast with them and headed to Orlando.
The highlights.
Posted by Joel at 9:06 AM 72 comments:

The other day a friend sent me the following quote because it brought me to mind. I really like the quote so I thought I put it here.

... An answer is a place where we can fall asleep as life moves past us to its next question....Perhaps the secret of living well is not in having all the answers but in pursuing unanswerable questions in good company.
- Rachel Naomi Remen

I am old enough to know that I have lots of questions (and am willing to ask others to travel with me on pursuing the answers).

It was a cold night when I got home, sub-zero temperatures. When I arrived home, however, I couldn't pull into the garage. Because of the cold, the garage door had gotten twisted and fallen off the track.
What to do. The garage door company closed at 4:00 and it was only going to get colder.
We did what any family would do (well, maybe not just any family). We rebuilt the door.
We pulled the sections of the door off that had fallen and, panel by panel, put it back up. Kudos to Marj & Kyle for the teamwork.
We'll have to live without an automatic garage door for a while but I think that is manageable.
Posted by Joel at 11:48 PM 2 comments:

What I learned from Ted

Last night I watched the "Ted Haggard: Scandalous" on TLC (The Learning Channel). The show briefly touches on the scandal that occurred in 2006 which got him fired and placed under a restorative path. It concentrates on events which occur after that with this summers starting of St. James Church. I realize it is quite heavily edited but here is what I learned watching the show.
A lot of people "know" the Bible. That doesn't mean, however, that they really know what is in the Bible. They know enough of the Bible to support a position or belief they may have. This was evident as you saw people quoting scripture to support their belief that he should never pastor again.
As a population, Christianity doesn't seem to believe in redemption. Simply put, redemption is the process that occurred on the cross and afterward. Think of it like a gift card. It is just a card until you use it.
As a population Christianity doesn't seem t0 believe in justification. Through the New Testament, the word for justified and righteous and their derivatives are the same word. The translators make the decision to which one is used where. An overly simplified meaning of justification is "Just as if I had never sinned". As I watched the show, I saw a world that seemed to treat Haggard as if he had changed but "the Church" which has a lot of mistrust of him.
As a population, Christianity doesn't seem to believe in sanctification. Sanctification is the process of becoming like Christ. It's that whole "If anyone is in Christ, they are a new creation". The calls and comments he received from Christians that were shown portray a people who do not believe that Haggard is a "new creation".
As a population, Christianity doesn't seem to believe in a God who is love. As you list the characteristics of God, there are a lot of them. The Bible makes it clear, however, that God is LOVE. If you need a refresher of what that means, look up 1 Corinthians 13. I'll admit that I wasn't always very loving when the scandal occurred. Hopefully, I've changed.
Being called a "Christian" identifies us with a lot of groups. There are the "liberals", "conservatives", "moderates" and "crazies". Unfortunately, the crazies get the press. As I write this I am reminded of the law passed in Arizona so that Westboro Baptist Church can not protest the funerals of those killed a week ago.
It is pretty sad when the world around us appears more loving to people like Haggard than those that are supposed to love.

My beloved friends, let us continue to love each other since love comes from God. Everyone who loves is born of God and experiences a relationship with God. The person who refuses to love doesn't know the first thing about God, because God is love—so you can't know him if you don't love. - 1 John 4:7-8 (The Message)