There is a feud afoot 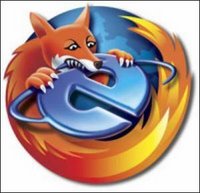 Ok, I think I am mixing metaphors (Hatfields & McCoys with Sherlock Holmes) but I suspect you get the drift.

At about the same time, Firefox has released their latest and greatest 2.0.

As with any new code, there are bugs, incompatibilities and, at least with browsers, security holes. As a result, you may want to wait awhile before upgrading...

In spite of that, I have moved to the latest of both.

During that move with Firefox, I realized one of my favorite features is the "add-ons" which are typically user written. One of my favorites was a "link visitor" which allowed you to mark all links on the page read or unread. This makes looking for new content quite a bit easier. It wasn't compatible (at least I thought). I found that the Link Visitor website had a work around so I now have my favorite plug in back.
Posted by Unknown at 9:51 PM

seamonkey all the way... mozilla engine and email all in one...

firefox and ie are for wusses