From Eternity to Here - Part Three...

Part 3 of "From Eternity to Here" describes God's Eternal Purpose as starting a new species.   Frank reasons that Adam and Eve were a new species which gave birth to humans.  Christ, however, was completely man and completely God, a species not seen until that point in time.   As followers of Christ, we also become part of that new species.
I was a little sad as the book ended.  Only because it ended, however.  Frank finishes the book pointing us back to Christ through telling us about his experiences up to the point of realizing what God's eternal purpose really is.   This is going to be on my "to re-read" list.
Posted by Unknown at 5:17 AM 1 comment:

What my dog teaches me about God... 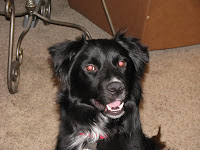 Having adopted Kiva at the beginning of the year, I am gaining some appreciation of my position within God's family.  Here is why...
Posted by Unknown at 9:30 PM 1 comment:

It is a weird journey that got me to this post...  The short explaination is that one of my favorite shows these days is Discover Channel's "Time Warp".  It is a couple of guys with some very fast (and expensive) video cameras doing some high speed video.
Here are some of my favorite clips...
In this clip, an arrow is shot through three water balloons...
And some trick shooting (this one is long)...

Posted by Unknown at 8:09 AM No comments: 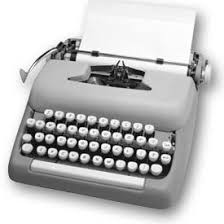 I realized how poorly written my last post was... I really need to be more awake when I post.  Rather than retract or change the last post, I figured I'd leave it and, instead, provide you with some amusement.
A song I remember growing up with was called "The Typewriter Song" which was composed by Leroy Anderson.  A conventional version of the song can be seen here.  If you are not familiar with the Typewriter... It predates computers and, for years while doing papers, was the bane of my existence.
Instead, however, I wanted to let you listen to a modern rendition, live, complete with mechanical failure....
Posted by Unknown at 7:12 AM 1 comment:

From Eternity to Here - Part Two...

The second section of "From Eternity to Here" is about God looking for a place to dwell... a home.
In this section, we get a view of a God who has a throne in Heaven but wants to "dwell" on earth.   We see this in the Ark of the Covenant and David's Temple.
Posted by Unknown at 5:30 AM No comments:

I thought I would post a couple of my favorite pictures that I took in Washington DC...
The picture below was taken on our last night.  It is the Jefferson Memorial.  It was a foggy night and I was having problems getting the photo I wanted because there was not enough light getting to the camera. 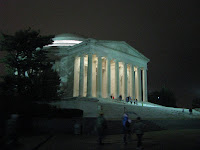 The shot below was taken from Arlington National Cemetary.  From there, you look down the national mall, past the Lincoln Memorial, the Washington Monument to the Capitol.  I extended the zoom out as far as possible (10x) and took the picture.   This is one of those days I had a bigger bulkier camera for better photos... Nah! 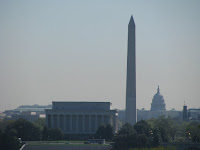 Posted by Unknown at 6:15 AM No comments: