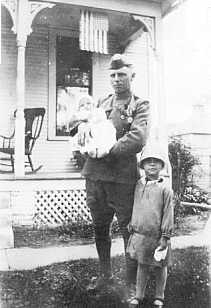 The following post was written by my Aunt (see the article below) to her grandchildren. Since William Ray Frederick was my grandfather, I (with permission) changed it to first person for posting here.

My father, your grand father, William Ray Frederick, was drafted and taken into the Army in World War I. He served in France and his life was spared when the Armistice was signed and the war was officially over. He was in Co. K, 352nd Inf., 88th Division. His division stayed on in France after the war to do clean up work and fill trenches, etc.

When he had been back farming for a year or two, the American Legion was formed and he was a charter member of the Cyclops Post 109 in Lisbon. One of the things the Legion did was to hold military services for those who died after they were out of the service. But, they also went to cemeteries on Decoration Day and held memorial services for those buried in different cemeteries. Daddy play the bugle and was the official bugler to play taps for any kind of memorial service. One of those times was for Decoration Day which was on May 31 every year.

To commemorate Decoration Day, at our home, it started the day before. Daddy washed the car so that when we went to the services he and his family arrived in a clean car.

On Decoration Day we got up early, but did not go with Daddy to the first service. He, several men of the Legion who were on the firing squad, one who carried the American flag and several other Legionnaires, went to the Andre Cemetery. That cemetery was, and still is, in the country east of Lisbon. The men held a service, the firing squad did the salute by firing guns in unison at least 3 times and then Daddy played taps.

After he got back from that service we all got in the car and drove to the Lisbon Cemetery. Mama had cut flowers from our garden, usually they were iris and peonies, and we took them along to the cemetery. We all 4 helped and put flowers on the graves of our family members. The American Legion Auxiliary had already been to the cemetery and had put a red poppy on the graves of all of those who had served in the Civil War and World War I. Then we added our flowers, but we also put them on all the graves of our relatives buried there.

We had to hurry to get that done as we could hear the Lisbon High School Band coming from down town and marching to the cemetery. There was a program after they got there. One of the things was the president of the senior high school class spoke The Gettysburg Address, and then there was a special speaker, the firing squad and then Daddy played Taps. Usually they had another person who played bugle stand some distance away and play taps when Daddy finished. That was called the "echo" and was quite impressive.

We went home from there, but later in the day we again took flowers and drove down to the little village of Sutliff. It is south of Lisbon and on the Cedar River. This service was held on the bridge that crossed the river. It was held at sunset and honored those who died at sea. The Auxiliary had most of that service, but the Legion men helped. Since I was a charter member of the Junior Auxiliary I was also there. But I would have been there anyway as families were all there. All of the children that were there had little bouquets of flowers. One of the American Legion Auxiliary members recited a poem. I can still remember it.

Then we threw our flowers over the edge of the bridge and watched them float away on the current of the river. Then Daddy played Taps. When he finished the other bugler, who was down at the end of the bridge, played the echo. It was timed so well that when he finished the echo, the sun was also going down out of sight. It was so quiet and peaceful and very impressive.

It was especially meaningful to our family as my Mama's first cousin, Otis Beese, had been in the Navy. His ship went down in what is now called the Bermuda Triangle. There has never been a trace found of it. He was serving on the USS Cyclops. The American Legion Post in Lisbon was named for him and his picture hung in the meeting hall of the Post.

Now of course, poppies are put on the graves of those from World War II, Korean Conflict, and all other conflicts in which our country was and is involved. There was so much respect for the flag also. I will close with a verse from a poem that I heard Mama say so often.

"Hat's off! Along the street there comes
The sound of the bugle, the ruffle of drums.
A flash of color beneath the sky,
Hat's off! The flag is passing by!"

Additional comments. In the early years of Decoration Day services, the Legion men wore their service uniforms. I think that was stopped when they could no longer get in to them. Also, from my side of the house you have 12 ancestor grand fathers who were in the Revolutionary War; 3 great-great grandfathers in the Civil War, your great grand father in World War I, your grandfather in World War II, and your Uncle Leo in the Korean Conflict.

Sent with love from your Aunt, proud daughter of Cpl. William Ray Frederick.

Thanks for sharing this Joel!

Anonymous said...
This comment has been removed by a blog administrator.
3:29 AM

Anonymous said...
This comment has been removed by a blog administrator.
4:32 PM

I found this site using [url=http://google.com]google.com[/url] And i want to thank you for your work. You have done really very good site. Great work, great site! Thank you!